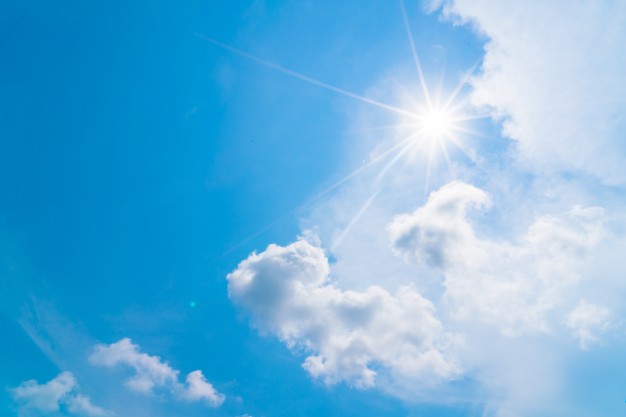 It seems time to praise science, but only if you do not care and prefer warming. In Europe winter are getting warmer at a pace faster than global average. The current winter proves it again. Whereas North America and Siberia saw record braking freezing temperatures in early 2018 (more), Europe is spared of wintery weather until now (Fig. 1). The most likely reason is increasing ocean use, particularly by off-shore windfarms and shipping, which churn the sea like moving spoon in a hot coffee pot. 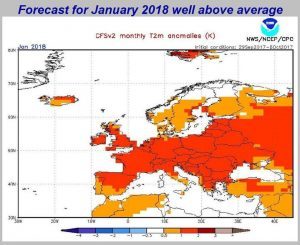 While climatology is not able to consider this mechanism, any cold from the Arctic or Siberia is kept at bay.  That should have been common knowledge since long, at least since the commencing days of World War II.

Actually the story is simple. Since the Little Ice Age has ended around 1850, the world has been getting warmer. By the end of the 1930s the temperatures, particularly in the Norther Hemisphere, increased to level close to current values. That stopped abruptly during the first war winter 1939/40 (Fig. 2, 3). The cause is to attribute to excessive ocean penetration due to naval warfare on a grand scale, bombs, sea mines, depth charges,
many million shells, and thousands of vessels, navigating, fighting, mine-operation, surveillance, and training. However, the impact on the winter conditions than and today seems contradicting. Winter 1939/40 was in many locations the coldest for up to 200 years or ever recorded, while currently climatology will soon declare Europe’s winter 2017/18 the warmest ever. The tragic is that both cases have the same source, man-made climatic changes, but science does not know, and is unable to inform politics and the general public correctly.

The way man has contributed to the extreme climate conditions in winter 1939/40 and is based on the same physically-dynamic process. The starting point is the intake of heat during the summer season in the reginal seas around Europe, particularly in the North- and Baltic Sea, which will be released during the subsequent winter. This ‘natural’ process is meanwhile greatly enhanced by human activities. The more or the longer the atmosphere gets an extra heat input, the less any Arctic or Siberian cold will get a chance to govern the winter in Europe. But the stored heat is not unlimited. If the available heat is released too quickly, the result reverses. When reginal seas are cooled to ‘unusual levels’, Siberian icy cold air can easily travel to the Atlantic shore. That occurred in winter 1939/40. As an example then and now, see Fig. 4 & 5. 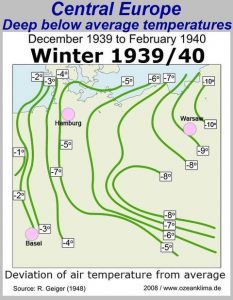 The winter meanwhile 78 years ago, could easily explain how reginal climate works. One needs only to imagine the picture of a baby bath with too warm water to bath the baby. The water will be turned around until the temperature is right for the baby. The longer it is turned the colder it gets. Is it so difficult to acknowledge and apply the every day experience with a too hot soup? The warring naval forces did the same across the coastal seas in Europe. It took only four months, and the first WWII winter run amok. Those responsible for this event, in first place the German Reichskanzler Adolph Hitler, should have been identified as a person appropriate to be considered as ‘climate change criminal’ since long. OK! Mr. A. Hitler may never have been charged due to insufficient scientific advice and being a crackbrained monster. But ignoring the case entirely raises the question of gross negligence. WWII contributed to a global cooling from 1940 to the mid-1970s. Ocean uses in all its facets, is likely to have contributed to the global warming over the last 150 years. The vast installation of hundreds of off-shore windfarms during the last decade is certainly a contributing factor to the higher than the global warming of the seas around Europe. In the North and Baltic Seas temperatures increased five to six times faster than the global average over the past 25 years, and three times faster in the Black and Mediterranean Seas. (Related Essay in PDF) Science spend many billions to prove a correlation between CO2 and global warming, but not one cent on how shipping, fishing industry and naval activities  have influenced weather and climate conditions since the end of the Little Ice Age around 1850.  Climate science behaves highly irresponsible. 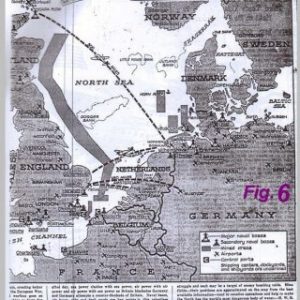 One thought on “Europe winter free – Thank to off-shore windfarms?”