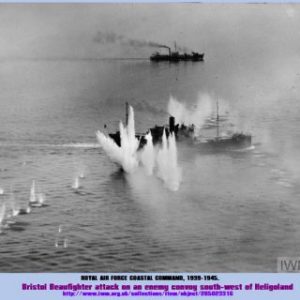 The recent climate talks in Bonn (COP23) worked on the pledge to limit global warming below two degrees Celsius. The target is extreme naïve, as long as climate science is not able and willing to analyze and explain what happened to the weather in Europe in the first few months since World War Two (WWII) started September 1st 1939. 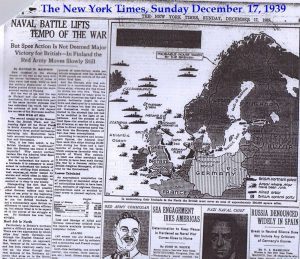 Europe suddenly experienced its coldest winter in more than 100 years.  The change came suddenly and completely unexpected.  Shortly later the British scientist A. J. Drummond expressed his amazement as it follows: “The present century has been marked by such a widespread tendency towards mild winters that the ‘old-fashioned winters’, of which one had heard so much, seemed to have gone forever. The sudden arrival at the end of 1939 of what was to be the beginning of a series of cold winters was therefore all the more surprising”. 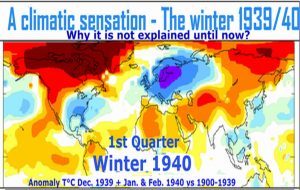 70 years have passed and science is completely ignorant on an evidently human interference in weather and climatic conditions due to naval warfare. Talking about warming without understanding cooling by man is suicidal ignorance, and terribly irresponsible.

Why Is the War Winter 1939/40 particularly interesting? (Details see 10 pages PDF)
The suddenness is what counts most. From one day to the other man befell the sea with unknown, widespread brutal force.  Only four months into WWII, Northern Europe was back in a small ice age. Numerous meteorological extreme conditions reveal a strong relationship to the high level of naval warfare activities.  For example:

What had happened? Thousands of ships crisscrossed the North Sea and Baltic day and night, ordered to fight, to monitor, to train. Cruising and fighting warships conducted a gigantic “field study”. Huge masses of water were agitated, and consequences were quickly felt. The warmth stored during the summer season, especially in the North Sea and Baltic was released more rapidly than unusually.  Siberian icy air could reach Western Europe’s shores.

Conditions and climate, the matter is completely neglected. Although the WWII parties collected data abundantly, climate research by several hundred universities and institutions, comprising several ten-thousand scientists has never undertaken efforts to analyze the “field study”, and to explain why the weather ran amok. Instead they scare the general public and governments with “global warming”, supporting the annual collection of $100 billion a year to help developing countries to reduce their greenhouse gas emissions and blame the effects on climate change. Towards those figures understanding the war winter weather 1939/40 would cost almost nothing.
Not able or willing either to confirm or exclude definitely a link between naval war and weather modification indicates is a miserable failure. If the situation would not be so serious, one would tend to speak of a hoax.