An Open Letter to the U.S. Energy Secretary Rick Perry:
To prove that AGW is hoax, look at ocean use during
the two World Wars 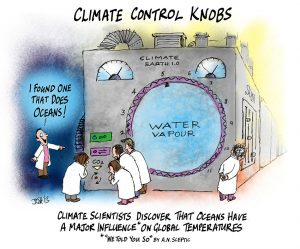 Asked in a recent CNBC interview whether carbon dioxide is the major source of AGW, you gave the imminent answer: “No, most likely the primary control knob is the ocean waters and this environment that we live in…and that man is having an effect on it.” This can be proven in the case of the Early Global Warming from 1918 to 1939, and the subsequent Global Cooling from 1940 to mid-1970. On these matters I have been working since James Hansen’s claim on AGW in 1988. As trained Master Mariner and a 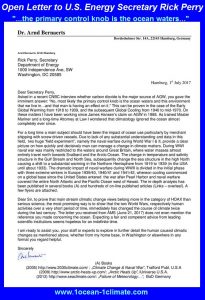 long-time Attorney at Law I wondered that climatology ignored the ocean almost completely ever since. 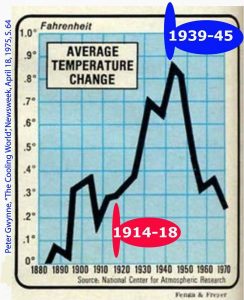 For a long time a main subject should have been the impact of ocean use particularly by merchant shipping with screw driven vessels. Due to lack of any substantial understanding and data in this field,  two huge “field experiment”, namely the naval warfare during World War I & II, provide a clear picture on how quickly and decisively man can manage a change in climate matters. During WWI naval war was mainly restricted to the waters around Great Britain, where water masses almost entirely travel north towards Svalbard and the Arctic Ocean. The change in temperature and salinity structure in the Gulf Stream and North Sea, subsequently change the sea structure in the high North causing a shift to a substantial warming in the Northern Hemisphere from 1919 to 1939 (in the USA until about 1933). The dramatic impact of naval warfare during WWII is divided in the initial

phase with three extreme winters in Europe 1939/40, 1940/41 and 1941/42, whereon cooling commenced on a global base since the United States entered  the war after Pearl Harbor and naval warfare covered the entire North Atlantic and the Pacific Ocean west of Hawaii. The in-depth analysis has been published in several books (A) and hundreds of on-line published articles (B: selection of Links –).

Dear Sir, to prove that main stream climatic change views belong more in the category of HOAX than serious science, the most promising way is to show that the two World Wars, respectively human activities over a very short period of time, immediately has changed the course of climate twice during the last century.The letter you received from AMS (June 21, 2017) does not even mention the reference you made concerning the ocean. Expecting a fair and competent advice from leading 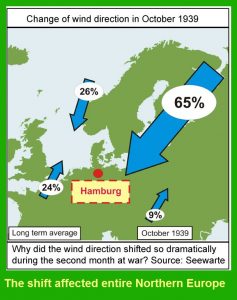 I am ready to assist you, your staff or experts to explore in further detail the human caused climatic changes as mentioned above, whether from my home base, in Washington or elsewhere in any format you regard helpful.
Sincerely,
Arnd Bernaerts