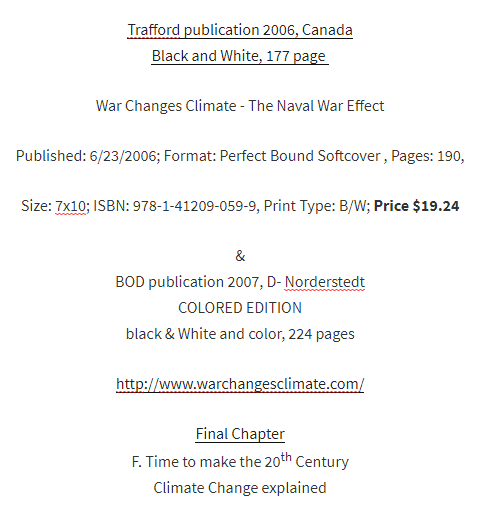 The aim of the book is to point the attention to the oceans. In order to explain the real cause of global rising temperatures, scientists started to study the phenomenon in earnest in the 1980’s. The aim of the book is to ensure that the mainstream of climate research is not constantly missing the point. Our aim is to establish that anthropogenic climatic changes are really due to two grand field experiments that men undertook during the last century.

The purpose of this book is to show that the activities of war at sea during WWI and WWII correlate perfectly with the only two significant climatic changes from 1900 until 2000: the one that started in 1918 and lasted until 1939 and the second one which started in the winter of 1939-40 and lasted until the early 1980s. The temperature rise during the recent 25 years can be “newly caused”, but could also be a résumé of the steep temperature rise between 1918 and 1939, interrupted by WWII.

CO2 gases are the top blamed cause for the so-called global warming. And it seems it is going to remain the same for most of the official world. The aim of the book is to leave no doubt that climate is the continuation of the ocean and that the ocean determines where the climate is heading to. In this scenario, CO2 may have only a remote role to play.

Oceans and seas are very complex. They are only randomly monitored ever since and, even today, not very well understood. But war at sea during two major world wars was a force reckoned immediately even by the ocean. Two climate changes during the last century prove the point. Winter temperatures had risen in Spitsbergen by 8ºC, between 1918 and 1939. The whole Europe got warmer year by year. German Chancellor Adolph Hitler started the war in 1939 and Northern Europe was immediately dragged back into Little Ice Age conditions not experienced in 100 years. Two further arctic war winters followed in the region with extreme naval activities until the war at sea went global, in 1942. And what followed without any delay? Can one speak of a surprise that a four decades of global cooling followed? Particularly the Northern Hemisphere felt the cooling, because here naval war was the most devastating and left a pronounced fingerprint in the downturn of global temperatures.

Even though the book section on naval warfare from 1942 until 1945 is short, the link between naval forces and global cooling is overwhelmingly convincing. Actually, it is the first reasonable explanation at all.

Even more reliable proof are the several regional super-large field experiments conducted four times in Northern Europe’s waters: 1916/17, 1939/40, 1940/41 and 1941/42, strongly felt throughout the region by extreme winter temperatures. Each time the effect was like a “big shock”.

More than 5ºC winter temperatures below average are totally out of tune with standard climate that should not allow any rest before not understood. But nothing happened in this respect over more than six decades.

Until now, only one of the most ruthless WWII warmonger, German Vice-Chancellor Hermann Goering, commented the arctic winter of 1939/40 by saying that “a higher power has sent the harsh winter conditions”. He was never prosecuted for being together with other Nazi leaders responsible for three polar winters and for four decades of global cooling.

Imagine there is global cooling, and no one cares. Imagine there is global warming and the world is highly concerned. The two assertions do not fit together. The first reflects circumstances more than half a century ago; the latter is the situation now. Insofar, the statements seem to contradict each other.  But in a wider sense, they fit well. Someone who claims to be able to explain current global warming must also be able to explain a pronounced global cooling which effected climate only a half century ago.  Ignoring the event for over six decades could be more ignorant than relating matters to a ‘higher power’.

Remember when unusual powerful hurricane ‘Katrina’ hit New Orleans, in the summer of 2005. People insisted being informed to understand the matter. Assume winter temperatures suddenly turn to Ice Age conditions not experienced for more than one hundred years, but no one talks about it because there is war. That was actually the case during the winter of 1939/40 when in several locations, in Northern Europe, average temperatures were more degrees lower then during the whole previous century, and WWII war machinery cooled down the earth for four decades.

If this investigation succeeds in proving that two major wars changed the course of climate twice in the last century, it will also prove that shipping, fishing, off-shore drilling and other ocean uses constantly contributed to global warming since the start of the industrialization, more than 150 years ago. A new chapter on the climate change issue could be opened, giving more attention to ocean affairs through forceful use of the potential of the “1982 United Nations Convention on the Law of the Sea”, which would lead to a better understanding and protection of the stability of our short-term weather and long-term global climate.

To the Book Summary

The SST Discontinuity in the 1940s – But no answer

This and That on “WHAT IS CLIMATE?”

Bernaerts’ Guide to the Law of the Sea

The SST Discontinuity in the 1940s – But no answer

This and That on “WHAT IS CLIMATE?”

Bernaerts’ Guide to the Law of the Sea