The terminology climate science use is all but helpful. Is it accidentally or consciously misleading? There is no scientifically sustainable definition of weather, climate, and natural variability (MORE). Only when it comes to “warming”, we know that it is connected to a rise in air temperature, but with numerous variations at not less locations. 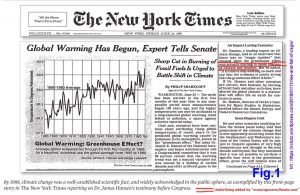 Someone who didn’t bother about precision and details, is James Hansen, who already in 1988 in testimony before U.S

Congress, warning that increasing atmospheric CO2 concentrations would lead to spiraling global warming said: that it was 99 percent certain that the warming trend was not a natural variation but was caused by a buildup of carbon dioxide and other artificial gases in the atmosphere. (Fig. 1), and that there was no ”magic number” that showed when the greenhouse effect was actually starting to cause changes in climate and weather.
Almost every explanation beyond the fact of the general warming trend since the mid-19th Century was superficial and largely meaningless, including the 99% claim of CO2 certainty. Only two years later his colleagues C.K. Folland et al concluded the IPCC (1990) Chapter 7, Summary on “Observed Climate Variations and Change (Fig. 2) with the notion: „Because we do not understand the reasons for these past warming events it is not yet possible to attribute a specific proportion of the recent, smaller, warming to an increase of greenhouse gases.” (Fig. 3)

The contrast to James Hansen could hardly be greater, but IPCC overcome this a problem quickly, readily with the next IPCC Report in 1995. The ‘trick’ is explained by a recent post at “Climate Etc.” (Jan/03/2018) titled “Manufacturing consensus: the early history of the IPCC”. Prof. Judith Curry reviews a book by Bernie Lewis that shows the scientific debate on detection and attribution was effectively quelled by the IPCC Second Assessment Report (1995). Indeed Chapter 8 does not hesitate to establish an initial evidence “of an anthropogenic climate signal – if models are correct” (Fig.5). The entire Chapter 8 Conclusion see Fig 5 & 7.

Actually the modeling is about increased air temperature, as indicated in the final paragraphs of Chapter 8.  And here the notion of J. Curry comes in: ”increasing temperatures say nothing about the causes of climate change.” That is great but too little. One can only identify the “causes of climate change” if a meaningful explanation of the term is established. That has never been the case (See below: EXCERPT from www.whatisclimate.com). Otherwise the discussion fouls the general public. ‘Warming’ and ‘climate’ should not arbitrarily mix up. It needs to be clear that temperature rise is a rise in temperature and nothing else. A pitty that even a excellent professional as Judith Curry seem not able to grasp the point.

A decade ago Prof. Roger Pielke Sr. started his invaluable blog with a post titled “What is Climate? Why Does it Matter How We Define Climate?” (July 11, 2005). Repeatedly he picked up the issue during the active running time of the blog until November 2012.  He was the best in this respect, but eventually did not manage to offer sustainable concept of weather relevant definitions. In “Physics Today” (Nov.2008, p.54f) he wrote:    “For many, the term “climate” refers to long-term weather statistics. However, more broadly and more accurately, the definition of climate is a system consisting of the atmosphere, hydrosphere, lithosphere, and biosphere”. That is as meaningless as the official definition in the UNFCCC (Climate Convention, Article 1 (para 3), 1992):
“Climate system” means the totality of the atmosphere, hydrosphere, biosphere and geosphere and their interactions.
The term “climate” remains meaningless, but weather and nature would fit better.
A more recent example is in a post be Tim Ball & Tom Harris at WUWT (Dec.01; 2017), which stress that: Some simple definitions are important for the public to understand, while offering in detail only scrap of no substance, namely:
Weather is the total of the atmospheric conditions at any given moment. It includes thousands of inputs from cosmic radiation from deep space, heating energy from the bottom of the oceans and everything in between.
Climate is the average weather conditions, and how they change, at a given location, over an extended period of time. While one can describe “daily climate,” obtained by averaging the 24-hourly readings or averaging the minimum and maximum readings in a 24-hour period, much longer periods are normally studied by climatologists.
No serious science community benefit from such nonsense. At least one and a while efforts are made to categories ‘Climate’ differently, as recently at Science Matters (11Jan2018), when assuming that “that global warming/climate change theory properly belongs in the field of social studies and thus should demonstrate a similar cycle.” – continue reading.  That would also make the use of the term CLIMATE in the global warming debate obsolete.
EXCERPT from “www.whatisclimate.com”:
The starting point is that “climate” is generally defined as average weather (by WMO and others) without defining “weather” in the first place (discussed HERE and HERE). It is a comparison between apples and pears. One item has a physical background; the other item is a ‘man-made’ technical mean, which we know as “statistic”. “Weather” consists of many dozen components (AMS-Glossary), which can be described in many hundred ways (see HERE). The statistics of single physical element, or specification of atmospheric behavior, remain an abstract mean.