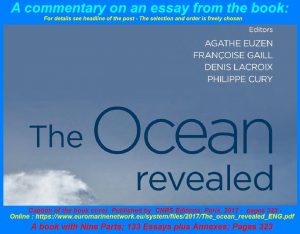 Natural, an overview over the global ocean, which covers almost three-quarter of its surface, needs an early place in a book with 133 chapters and 323 pages.  The authors got the place. They raise some principle facts, including that the oceans hold a huge volume of salt water: 1.4 billion cubic meters! Its average temperature is just 2 °C. The coldest temperatures are negative, because the salt in seawater means that it does not 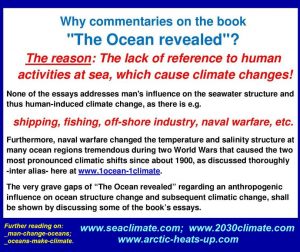 If science talks about climate, they talk about average weather in the atmosphere. That

raises immediately a principle point missing in the essay, namely that the ration between water in the air and the ocean is 1:1000, and the annual temperature difference about 15° Celsius. The sun merely heats a very thin layer of the sea surface (see images). Only a small amount of freezing cold deep-water replacing surface water, could trigger a period of low air temperatures, as for example from 1940 to the mid-.1970th, presumably due to naval warfare in WWII (see last image). 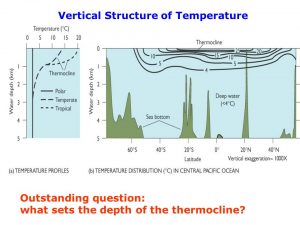 Outstanding question: what sets the depth of the thermocline?

Due to the fact that cold water will be denser than warm water, and salty water will be denser than less salty water, the ocean structure from top to its maximum depth of 11’020 meter, from the human perspective, seems fairly stable, but any force pushing deep water to the surface, would change the situation dramatically. The authors neglect this point. They neither raise the possible influence by man’s activities at sea that pushes sun-warmed surface water down to lower sea levels. These activities may have significantly contributed to global warming since the end of the Little Ice Age around 1850. 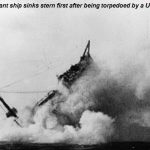 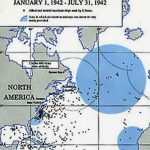 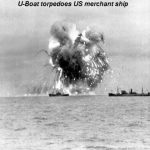 Beside from mentioning “the ballet of the currents”, meaning the global ocean current system, within which the water takes 1000 years to complete on full lap, their major concern is the impact of carbon dioxide (CO2). To them not the oceans-make-climate, instead “the ocean also plays a role in regulating carbon dioxide in the atmosphere” (p. 23).

The authors explanation goes at is follows:
__ On average, human activities emit 10 gigatonnes of CO2   per year. A third of this additional gas penetrates 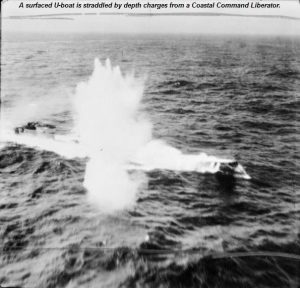 into the ocean, is absorbed in the surface layers and therefore upsets the natural balances.
­__ Two balances are affected: the physico-chemical and biological CO2 pump, and the energy exchange between the air and the water, since the ocean absorbs 90% of global warming.
__Climatologists are therefore fully justified in worrying about this slow accumulation of changes in our ‘blue planet’. (page 23) 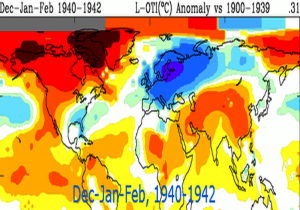 By this a gross limitation of the relevance of the sea in climate change matters to the carbon-dioxide issue, they lack any imagination of how the Blue Planet works. The planet is not only blue but extreme cold, where the lifeline of man is bound to an extreme thin sea surface layer, which can be changed by natural events, but also by numerous human activities at sea. Science foremost task would be to understand how much man has already induced changes in the ocean system and subsequently altered weather pattern and climate. The principle reference to CO2 is by far too little to be concerned of, which is to prevent the Blue Planet from anthropogenic global warming (AGW) and climate changes.