The most fascinating thing about the day on which the 1982 Law of the  Sea Convention comes into force in a few months’ time will presumably be the fact that hardly anyone will be fascinated. While the Earth Summit forced 170 countries to fly their leaders and delegates to Rio in order to plan the planet’s preservation, not even two heads of state will meet on 16th November 1994 to pay tribute to the 1982 Convention, although this paper will pave the way for rediscovering that water matters and that its source is the oceans. 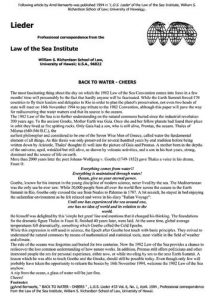 understanding on the natural commons buried since the industrial revolution 200 years ago. To the ancient Greeks, Mother Earth was Gaia. Once she and her fellow planets had found their place in orbit they lived as fire spitting rocks. Only Gaia had a son, who is still alive, Pontus, the oceans. Thales of Miletus (640-546 B.C.), the earliest philosopher and considered to be one of the Seven Wise Men of Greece, called water the fundamental element of all things. As this thesis was only preserved for several hundred years by oral tradition before being written down by Aristotle, Thales’ thoughts fit well into the picture of Gaia and Pontus. Pontus’ mother, born in the depths of the universe, aged, wrinkled, but still alive, as shown by earth’s volcanic activities, and a son in his best years, strong, dominant and in charge of life on earth.

Everything comes from water!!

Everything is maintained through water!

Ocean, give us your eternal power. 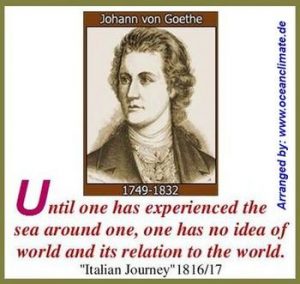 Goethe, known for his interest in the young discipline of modern science, never lived by the sea. The Mediterranean was the only sea he ever saw. While 20,000 people from all over the world flew across the oceans to the 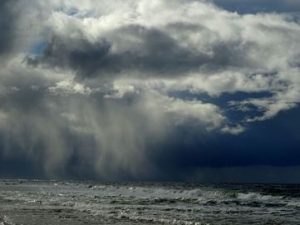 Earth Summit in Rio, Goethe only crossed the sea from Naples to Palermo in 1787. A bit seasick, he stayed in bed enjoying the unfamiliar environment as he felt relaxed and wrote in his diary “Italian Voyage”:

Until one has experienced the sea around one,
one has no idea of world
and its relation to the world.

He himself was delighted by this ‘simple but great’ line and mentions that it changed his thinking. The foundations for the dramatic figure Thales in Faust II, finished 40 years later, were laid. At the same time, global average temperatures fell dramatically, something which Goethe called the Cold Epoch. 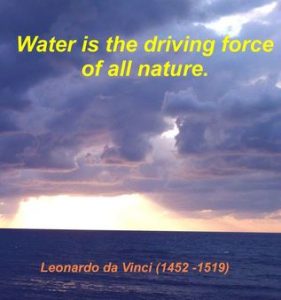 While this expression is still used in science, the Epoch after Goethe lost touch with basic principles. They strived to understand the natural commons by means of mathematical and statistical tools, most visible in the field of weather and climate.

The rule of the oceans was forgotten and buried for two centuries. Now the 1982 Law of the Sea provides a chance to rediscover the lost common understanding of how nature works. In addition, Pontus still offers politicians and other interested people the sea for personal experience, either now, or while traveling by sea to the next Earth Summit. A lesson which he was able to teach Goethe and the Greeks, should still be possible today. Even though only few will probably have taken the opportunity to relearn the basics by 16th November 1994, welcome the 1982 Law of the Sea anyhow.

A nip from the ocean, a glass of water will be just fine.

Resume: Since the essay has been published, 35 years ago, little has changed. Science still ignores Gaia, Pontus and the Oceans.  The potential of the 1982 U.N. Law of the Convention for understanding and protection of climate is still not recognised.