In Northern Europe winter hasn’t shown up. The current status is shown in a number of Figures. The situation is far away 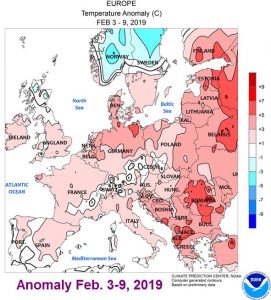 from usual. Current February is several degrees above ling time average. Will it go on this way, or will harsh winter conditions emerge in spring? Presumably only few meteorologists will try to make conclusive forecast on Europe’s weather in forthcoming March, April and May. Their computer models rely on statistics. Rarely do they included two factor influencing Northern Europe’s winter conditions, namely the influence of the prevailing wind conditions, and the availability of stored heat in the regional and coastal seas.  As these two aspects may play an important part in a warmer or colder spring, the two aspects are discussed hereafter.

The West Wind Drift supported by warm North Atlantic and Norwegian Current keep North Europe’s winter mild. How many offshore wind turbines are needed to decrease the flow of this warm air eastwards, which usually keep Siberian temperatures at bay from reaching West Europe? Today already more than 1200 turbines are grounded in a water depth down to 30 meters and more. The turbines “consume wind”, which is thereon no longer available in the West Wind Drift to flow smoothly eastwards. Will it one day show an impact on the weather and air temperatures during spring 2019? 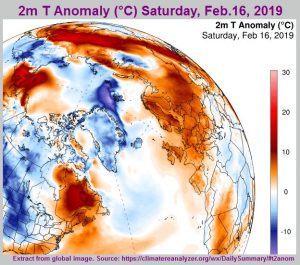 with thousands of wind turbines could have sapped the power of three real-life hurricanes that may diminish peak near-surface hurricane wind speeds by 25–41 m s−1 (56–92 mph) and storm surge by 6–79%. That is impressive, but for a reduced Hurricane Katrina’s wind speeds by 50 percent by the time it reach land a protective wall of 70,000 offshore wind turbines built 60 miles offshore from New Orleans would be needed.
The West Wind Drift across Northern Europe is an important factor in the Northern Hemisphere weather system where off-shore and land-based turbines may have an impact. It seems neither any regulatory agency nor science has shown any interest in the matter until now. 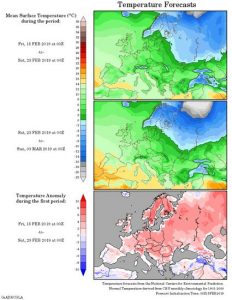 The sea and heat input – and heat output.

The mean water depth of the Baltic is 52m (Nord Sea, 94m) and is less in the south-west than in the eastern Baltic. The salinity is very different from location to location, but in average considerable higher in the North Sea (32-35psu), low in the western Baltic (about 8psu), and Gulf of Bothnia near zero. As a general rule the water temperatures vary over the seasons in the upper 50 meters water column, below that depth the water is cold and remains fairly unchanged throughout summer and winter. That applies either to the North Sea as well as to the Baltic Sea.

The effect of Stirring 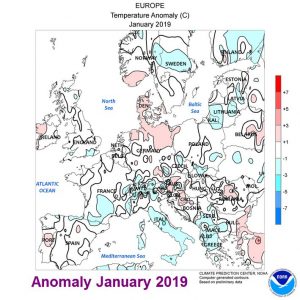 Wherever variant water temperatures consist in a sea water column, due to internal or external forcing, an exchange between the sea layers happens at any time. As already mentioned wind and storms are observed factors. But about human forcing ‘obstacles’ little is taken into account, although it is well known that there is a strong interaction between a physical structure and a flow field.

Up to a dozen of human activities at sea affect the sea water column. All offshore wind turbine units are connected with the sea floor, either by platform or anchored as floating units. The effect is largely increased by shipping, fishing and many other off-shore activities. During the winter season they ensure that a sub-cold sea surface is replaced by warmer water from lower levels, which thereon release further heat into the atmosphere. But the heat stored during the summer season is limited. Once exhausted colder air prevails, which eventually cause a cold 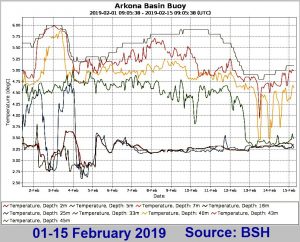 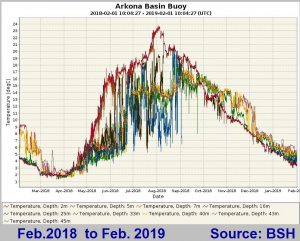 Only few weeks remain and we will see which air temperature conditions prevail across Northern Europe. If the conditions are like winter, read the foregoing text again for better understanding: WHY!