Does fair reporting alone serve the truth? Not if one neglects the NYT Christmas story of 24th December 1939! 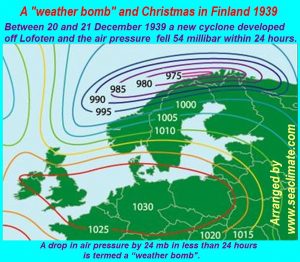 American Meteorology Society about 27 extreme weather events 2016, down to “five items”, which researchers around the world analyzed, and found that human-caused 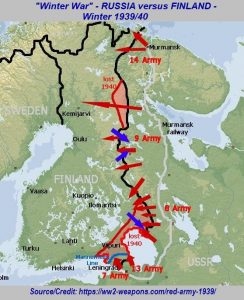 climate change was a “significant driver” for 21 of them. The NYT titled the article: “How Global Warming Fueled Five Extreme Weather Events”. That is fair, but is it enough in the light of what the NYT reported about weather events during World War II, but never asked whether it was likely human-caused. More than seven decades have been lost to understand how much have the two World Wars contributed to climate change during the last century (Book 2004; Book 2012).  We give a chilling example: White Christmas 1939 in Finland, and subsequently a few more details.

*) In the International Edition on December 20th.

In Finland the average December air-temperature usually range between – 4°C (south) and -6°C (north) – Fig. 4. That was generally the case in the 1930s, but changed dramatically as soon as the first war winter had started in December 1939. On Thursday, 30 November 1939 the Russian Red Army attacked Finland with several million men, 1’000 tanks

“The cold numbs the brain in this Arctic hell, snow sweeps over the darkened wastes, the winds howl and the 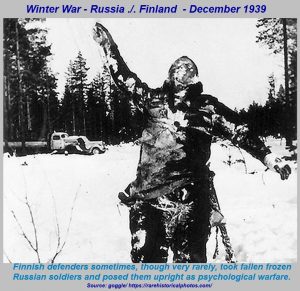 temperature is 30 degrees below zero (minus 34.4 ° C). Here the Russians and Finns are battling in blinding snowstorms for possession of ice-covered forests. …I reached the spot just after the battle ended. It was the most horrible sight I had ever seen. As if the men had been suddenly turned to wax, there were two or three thousand Russians and a few Finns, all frozen in fighting attitudes. Some were locked together, their bayonets within each other’s bodies; some were frozen in half-standing positions; some were crouching with their arms crooked, holding the hand grenades they were throwing; some were lying with their rifles shouldered, their legs apart….(T)heir fear was registered on the frozen faces. Their bodies were like statues of men throwing all their muscles and strength into some work, but their faces recorded something between bewilderment and horror.”

As  shocking as the story is, it is not less shocking to recognize that climate science thinks it can ignore such report, which certainly has much to offer in explaining human-caused climatic changes! 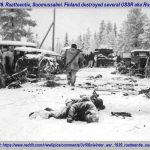 Since the 1st of September numerous significant deviation from statistical means occurred; for example:
diversion 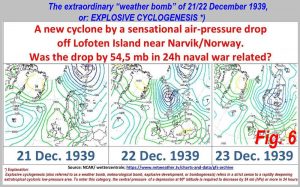 of a cyclone, rain pattern, and wind shift. About 250 ships with 1 Million tons had been sunk (Fig. 7). Naval war ranged heavily in the Baltic, North Sea and from Orkney Island to the North Cap. Was it naval activities off the coast of Norway that caused a drop in air pressure of 54,5 mb within 24 hours (see Fig. 1, 6, 13 & 14)? Up to 12 Bft wind were reported. A few years later the meteorologist M. Rodewald regarded it as a sea-change for winter 1939/40, which it was not, at least not alone. From a meteorological point of 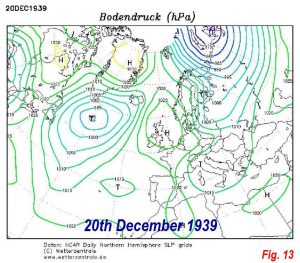 view, almost every day in WWII offered exciting weather situations, which most likely was closely linked to treatment of ocean regions by naval war. Claiming instead “natural variability” sounds dumb, and is irresponsible. Naval war in the sea areas of Europe, particularly in the North- and Baltic Sea, could be easily identified as a significant contributor to many weather events and the mentioned Christmas story by NYT reporter James Aldridge. Not only have the war victims deserved an explanation, we all need to know! Actually, Christmas 1939 was only the very early beginning of the coldest European winter in more than 100 years, and several hundred ‘meteorological specialties’ during the further five war years, while climate science knows nothing about it, neither does show any interest. Let’s still hope for better times! 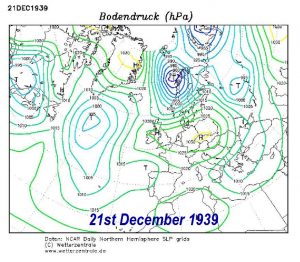 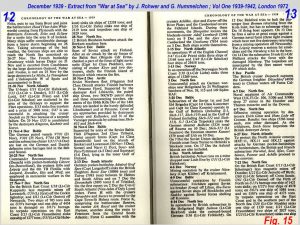 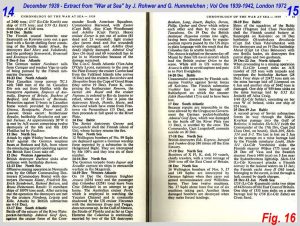