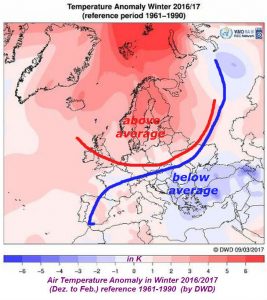 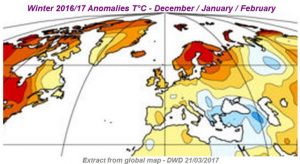 indicates the significant between Northern and Southern Europe. Instead of discussing the last winter on this basis, the DWD summarize the winter 2016/2017 as exceptionally dry, very sunny and somewhat too mild.

The Met-Off agrees that it was a rather dry and mild winter.  Both do not find one word on whether the clear temperature distinction (Fig.1 )  requires some explanation, or whether human activities at sea may have contributed. For further reading we recommend this LINK: Winter 2015/16 –versus – Winter 1939/40

Offshore windfarms, shipping and other activities have a pronounce impact on the a 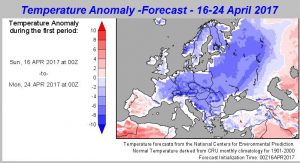 tmosphere throughout the year. They may have significantly contributed to the  warming during the early part of the winter (Fig. 2 – above left & 3) and to lower temperature now in spring (Fig. 4 & 5).

Even only a minor contribution, must be recognized by science. Neither mentioning the aspect, nor undertaking any research in this respect is irresponsible.   Please read the following post as well!!

Update on 30 April: Spring warmth came on hold across Europe in early 3rd week of April (19 April), and cold weather brought snow to parts of Germany, Austria and the Balkans. Fig. 6

Europeans warm their winters,
but science does not know why!

And cool down their summers?

Not knowing why the European winters are getting warmer and warmer is a shame. Not analyzing the potential reasons is a scandal. For years it is known that warming was the strongest over Scandinavia, especially in winter, (EEA-1). That can be easily 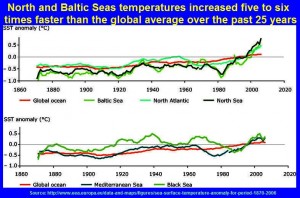 be connected to warmer seas. “Over the past 25 years the rate of increase in sea surface temperature in all European seas has been about 10 times faster than the average rate of increase during the past century “(EEA-2). “In the North and Baltic Seas temperatures increased five to six times faster than the global average over the past 25 years, and three times faster in the Black and Mediterranean Seas” (EEA-2). Establishing a convincing chain of causation between warmer Europe and human activities at sea is the inevitable conclusion. Not for climate science running the global CO2 warming story, but who is blind, ignorant, unable to see the obvious link, and is unwilling to undermine their AGW theory.

Here is the consideration posted by Ron Clutz [30 March 2016]

To start with, he is analyzing “climate” properly. Climates are plural, not singular; the term is a human construct referring to distinctly local and regional patterns and expectations of future weather. Secondly, he addresses changes observed in one particular season as a way to identify inter annual variation. Thirdly, he is well aware of oceanic fluctuations, and seeks to understand human effects in addition to natural variability.

From the Abstract:
The marine environment of North Sea and Baltic is one of the most heavily strained by numerous human activities. Simultaneously water and air temperatures increase more than elsewhere in Europe and globally, which cannot be explained with ‘global warming’.

The climatic change issue would be better understood if this extraordinary regional warming is sufficiently explained. The regional features are unique for in-depth studies due to different summer-winter conditions, shallowness of the seas, geographical structure, and main pathway for maritime weather patterns moving eastwards.

The impact of sea activities on the seasonal sea water profile structure is contributing to stronger regional warming, change in growing season, and less severe sea ice conditions. The impact of the man, whether small or large, should be understood very 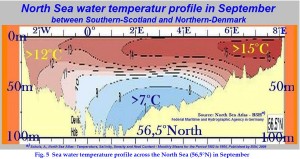 Pay particular attention to the Discussion at the end, which includes this:

Regional seas in Northern Europe are minor from size and volume in global ocean affairs. Weather is “done” elsewhere, but every location contributes to the global picture. In the case of N-Europe it may be more significant as weather can be divided in maritime and continental influence, and due to the global air circulation from West to East, it is a gate. It may support the flow of warm wet air eastward (low pressure), or stem it by dry and cold continental air (high pressure), by diverting low pressure areas– in extreme circumstances – towards the Bering Sea or Mediterranean. In so far the North Sea and Baltic play a crucial role in how to open or close this gate.

Three facts are established: higher warming, a small shift in the seasons, and a decreasing sea ice cover. In each scenario the two

sea’s conditions play a decisive role. These conditions are impaired by wind farms, shipping, fishing, off shore drilling, under sea floor gas-pipe line construction and maintenance, naval exercise, diving, yachting, and so on, about little to nothing has been investigated and is understood.

Summary:
The facts are conclusive. ‘Global Climate Change’ cannot cause a special rise in temperatures in Northern Europe, neither in the North Sea nor the Baltic or beyond. Any use of the oceans by mankind has an influence on thermo-haline structures within the water column from a few cm to 10m and more. Noticeable warmer winters in Europe are the logical consequence.

The text was first published a few months ago. 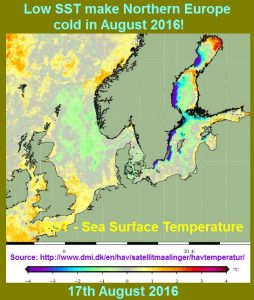 And is the summer temperature 2016 in
Northern Europe below average ?

In the same way as winter temperatures may affect the winter conditions, the opposite is likey to occure – at least temprarily – during ther summer season. Warm surface water is replaced by colder water from sub-water layers. The variable weather conditions during this summer so far have the potential for having contributed, and should not be ignored when analyzing the situation.

12th August 2016 _ http://dailycaller.com/2016/08/12/europe-hit-with-frigid-weather-snow-in-august/ –
“Northern Europe was hit with some weird August weather in the past week, as summer snows fell in Sweden and a city in Saxony experienced its coldest temperature on record.

Åre, Sweden was hit with summer snow Thursday, and while temperatures across Sweden are expected to stay between 50 and 60 degrees Fahrenheit, ski resort owners were thrilled to see the snow.”

18th August, 2016, ACCUWEATHER: “Wet, windy conditions to stretch from Ireland and the U.K. into Scandinavia – On the heels of a cool and wet summer for parts of the United Kingdom, an increasingly stormy autumn is expected.”